TB and the skin: Understanding Cutaneous forms of TB

TB is a disease that is caused by the bacteria Mycobacterium tuberculosis. It can affect the organs, like the lungs, and it can also affect the skin. There are different types of Cutaneous TB, some caused by direct infection of the skin with the bacteria, others from the spread of the bacteria via the bloodstream or from surrounding tissue. True cutaneous TB is rare but very serious.
There is a group of conditions that are caused by hypersensitivity of the skin to mycobacterium tuberculosis. Commonly referred to as Tuberculids. These normally occur on the skin as a warning sign of an underlying infection of TB elsewhere. A focus of TB in the lung, lymph nodes or genitourinary system can result in rashes in the skin. Common tuberculids include Erythema Induratum, Lichen scrofulosorum and papulonecrotic tuberculids. 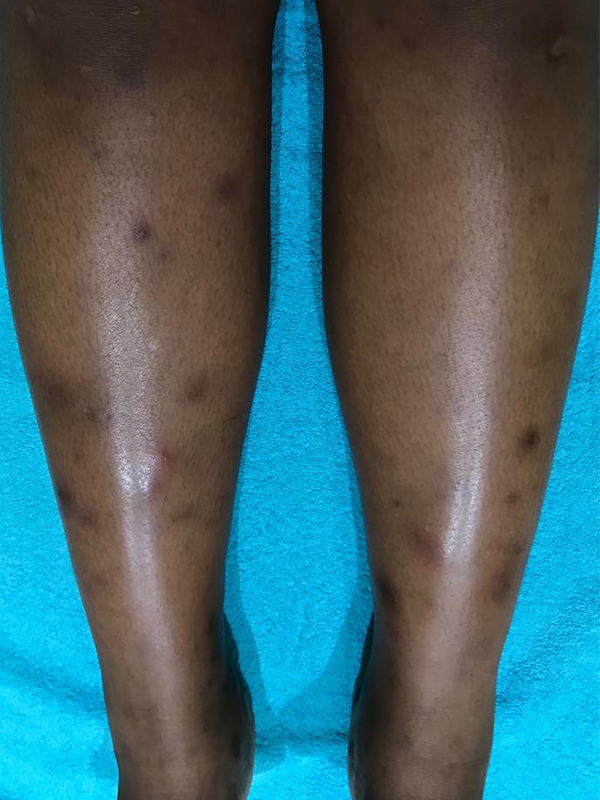 Erythema Induratum is also commonly called nodular vasculitis. This skin condition presents as sensitive plaques typically on the legs (calves, shins) the buttocks, feet, and thighs. This condition can affect people of any race or gender but is most commonly seen amongst women, more so African women.

A common trigger seems to be infection. The condition can arise spontaneously and without an identifiable trigger. In other cases, certain medications are identified as triggers. It is also thought to be a complex condition in which the body responds to antigens with antibodies which are deposited on the outside of cells walls, leading to acute or chronic inflammation. It is not hereditary.

How is Erythema Induratum diagnosed?

Erythema Induratum is diagnosed by means of clinical observation of the painful red, inflamed plaques and nodules on the legs and thighs and other physical symptoms. Erythema Induratum nodules are usually on the anterior portion of the lower legs. These can sometimes ulcerate and leave dark marks or scars.

A skin biopsy could reveal the presence of nodular vasculitis (inflammation of the blood vessels) in the fat layer.

Dr Khoza may also order chest X-Rays and other medical tests to support and confirm the diagnosis.

How is Erythema Induratum TB treated?

While TB is usually the strongest cause, other underlying conditions need to be ruled out and treated in order to relieve Erythema Induratum. In the case of TB, full TB treatment is commenced. Any possible medications that could be triggering the condition need to be re-evaluated or changed and in some cases, antibiotics may be introduced. Bed rest, elevated feet, bandages, and avoiding bad habits, like smoking, are recommended.

Lichen scrofulosorum is also sometimes called Tuberculosis cutis lichenoides. It is the least common of the three tuberculids however it’s one that is commonly seen in children. It presents as a rash of very tiny skin-coloured papules across the skin (it can sometimes be a reddish brown in colour). The rash is typically found across the abdomen, chest, back and arms or legs, face and ears.

How is Lichen scrofulosorum diagnosed?

This condition resembles so many other dermatological conditions. For that reason, along with its rarity, makes it easy to misdiagnose. The papules are often also asymptomatic, meaning there are no other symptoms to indicate it is anything but a rash.

In order to give a diagnosis that is accurate, a skin biopsy is performed, a blood sample is drawn, a chest X-ray is performed, and a sputum sample may be requested but not often.

How is Lichen scrofulosorum treated?

Anti-tubercular drugs will resolve the condition quickly and effectively.

Papulonecrotic tuberculid is a chronic skin condition. It covers the skin with successive crops and lesions that are evenly spread across the affected area. There are usually no other symptoms, although it is associated with the bacteria that causes TB.

This type of condition is caused by a sensitivity to an infection somewhere else in the body caused by M. tuberculosis bacteria.

Papulonecrotic tuberculid is diagnosed by means of clinical observation. A skin biopsy, chest X-Rays and other medical tests, like blood tests, to support and confirm the diagnosis.

Treatment of this condition is aimed at the underlying infection, which causes the sensitivity and thereby, the breakouts. If active Tb is present, a combination of 4 of the TB drugs will be prescribed.

TB remains a major problem in South Africa, and it can affect any organ of the body. Regular visits to your doctor will help to prevent its spread and its severity. Book a consultation with Dr Khoza to achieve and maintain skin health.